The City of Hickory Hills is pleased to present its Annual Water Quality Report.  Our goal is to provide the City with a safe and dependable supply of drinking water.  This report is provided to assist you in becoming more knowledgeable about your drinking water. The reporting period for this data is calendar year 2017. A similar report will be furnished each calendar year.  We want you to understand the efforts made to continually improve and protect your drinking water. We’re pleased to report that our drinking water is safe and meets all federal and state standards. If you have any questions about this report, please contact Susan Lehr at the Public Works Department (708-598-7855) between the hours of 8:00am and 4:00pm Monday through Friday or you can attend the City Council meetings on the 2nd and 4th Thursday of each month at 7:30pm.

Since 1988, residents of Hickory Hills have received exclusively (100%) Lake Michigan water from the City of Chicago via the water supply lines of the West Suburban Water Commission (formerly known as Justice-Willow Springs Water Commission).

Sources of drinking water (both tap water and bottled water) include rivers, lakes, streams, ponds, reservoirs, springs and wells. As water travels over the surface of the land or through the ground, it can dissolve naturally occurring minerals and radioactive materials, and pick up substances resulting from the presence of animals or human activity. Possible contaminants consist of:

Pesticides and herbicides, originate from a variety of sources such as agriculture, urban storm water runoff, and residential uses.

Organic chemical contaminants, including synthetic and volatile chemicals, are by-products of industrial processes and petroleum production, and may originate from gas stations, stormwater runoff and septic systems.

Radioactive contaminants, which may be naturally occurring or be the result of oil and gas production and mining activities.

The City of Hickory Hills routinely monitors for contaminants in our drinking water according to Federal and State laws. The Public Works Department takes numerous water samples throughout the City, twice a month, as required by Illinois Environmental Protection Agency (IEPA). Water samples are sent to an IEPA certified laboratory for analysis. Copies of the results are sent to the IEPA in Springfield. The Public Works Department employs six state tested IEPA certified water plant operators. These individuals have formal training and passed a written test given by the IEPA to obtain this qualification. The attached table shows the results of our monitoring for the period from January 1st to December 31st, 2017.  The United States Environmental Protection Agency (USEPA) has established limits to be safe and acceptable. Any contaminant at or above the established “Maximum Contaminant Level” (MCL) will be noted.

Certain quantities of some substances are essential to good health. Drinking water, including bottled water, may reasonably be expected to contain at least small amounts of some contaminants. The presence of contaminants does not necessarily indicate that water poses a health risk. More information about contaminants and potential health effects can be obtained by calling the USEPA’s Safe Drinking Water Hotline (1-800-426-4791). In order to ensure that tap water is safe to drink, USEPA prescribes regulations which limit the amount of certain contaminants in water provided by public water systems. FDA regulations establish limits for contaminants in bottled water which must provide the same protection for public health. Some people may be more vulnerable to contaminants in drinking water than the general population. Immuno-compromised persons such as those with cancer undergoing chemotherapy, persons who have undergone organ transplants, people with HIV/AIDS or other immune disorders, some elderly, and infants can be particularly at risk from infections. These people should seek advice about drinking water from their health care providers. USEPA/CDC guidelines on appropriate means to lessen the risk of infection by Cryptosporidium and other microbial contaminants are available from the USEPA’s Safe Drinking Water Hotline 800-426-4791.

If present, elevated levels of lead can cause serious health problems, especially for pregnant women and children. Lead in drinking water is primarily from materials and components within service lines and plumbing. We cannot control the variety of materials used in plumbing components. When your water has been sitting for several hours, you can minimize the potential for lead exposure by flushing your tap for 30 seconds to 2 minutes before using for drinking or cooking. If you’re concerned about lead in your water, you may wish to have your water tested. Information on lead in your drinking water, testing methods, and steps you can take to minimize exposure is available from the Safe Drinking Water Hotline or at http:// www.epa.gov/safewater/lead.

The City of Chicago utilizes Lake Michigan as its source water via two water treatment plants. The Jardine Water Purification Plant serves the northern areas of the City and suburbs, while the South Water Purification Plant serves the southern areas of the City and suburbs. Lake Michigan is the only Great Lake that is entirely contained within the United States. It borders Illinois, Indiana, Michigan, and Wisconsin, and is the second largest Great Lake by volume with 1,180 cubic miles of water and third largest by area.

The IEPA considers all surface water sources of community water supply to be susceptible to potential pollution problems. The very nature of surface water allows contaminants to migrate into the intake with no protection only dilution. This is the reason for mandatory treatment for all surface water supplies in Illinois. Chicago’s offshore intakes are located at a distance that shoreline impacts are not usually considered a factor on water quality. At certain times, however, the potential for contamination exists due to wet-weather flows and river reversals. In addition, the placement of the crib structures may serve to attract waterfowl, gulls and terns that frequent the Great Lakes area, thereby concentrating fecal deposits at the intake and thus compromising the source water quality. Conversely, the shore intakes are highly susceptible to storm water runoff, marinas and shoreline point sources due to the influx of groundwater to the lake.

To view a summary of the completed Source Water Assessment, you may access the Illinois EPA website at www.epa.state.il.us/cgi-bin/wp/swap-fact-sheets.pl

The City of Chicago has continued monitoring for Cryptosporidium, Giardia and E coli in its source water as part of its water quality program. To date, Cryptosporidium has not been detected in these samples, but Giardia was detected in 2010 in one raw lake water sample in September. Treatment processes have been optimized to provide effective barriers for removal of Cryptosporidium oocysts and Giardia cysts in the source water, effectively removing these organisms in the treatment process. By maintaining low turbidity through the removal of particles from the water, the possibility of Cryptosporidium and Giardia organisms getting into the drinking water system is greatly reduced. Also, in compliance with the Long Term 2 Enhanced Surface Water Treatment Rule Round 2, the City of Chicago has continued the 24 months long monitoring program that was started in April 2015, collecting samples from its source water once per month to monitor for Cryptosporidium, Giardia, E. coli and turbidity with no detections for Cryptosporidium and Giardia reported so far. The City of Chicago has also continued monitoring for hexavalent chromium, also known as chromium-6. USEPA has not yet established a standard for chromium-6, a contaminant of concern which has both natural and industrial sources. Please address any questions or concerns to Chicago’s Department of Water Quality Division at 312-742-7499.

The City is proud to report that no violations have occurred in the past 25 years, and none have been reported for this reporting year. In addition, the City meets or exceeds the standards of Federal and State law without a request for any variances, exemptions, or waivers from any governing body regarding water sampling.

MCL (Maximum Contaminant Level):  The highest level of a contaminant allowed in drinking water. MCL’s are set as close to the MCLG’S as feasible using the best available treatment technology.

MCLG (Maximum Contaminant Level Goal): The level of a contaminant in drinking water below which there is no known or expected risk to health. MCLG’s allow for a margin of safety.

AL (Action Level):    The concentration of a contaminant which, if exceeded, triggers treatment or other requirements which a water system must follow.

ALG (Action Level Goal): The level of a contaminant in drinking water below which there is no known or expected risk to health.  ALG’S allow for a margin of safety.

Level 1 Assessment: A level 1 assessment is a study of the water system to identify potential problems and determine (if possible) why total coliform bacteria have been found in our water system.

Level 2 Assessment: A level 2 assessment is a very detailed study of the water system to identify potential problems and determine (if possible) why an E. coli MCL violation has occurred and/or why total coliform bacteria have been found in our water system on multiply occasions.

Range of Detections:  This column represents a range of individual sample results, from lowest to highest that were collected during the CCR calendar year.

Avg.:       Regulatory compliance with some MCL’s are based on running average of monthly samples.

MRDL (Maximum Residual Disinfectant Level: The highest level of disinfectant allowed in drinking water. There is convincing evidence that addition of a disinfectant is necessary for control of microbial contaminants.

MRDLG (Maximum Residual Disinfectant Level Goal: The level of disinfectant in drinking water below which there is no known or expected risk to health. MRDLGs do not reflect the benefits of the use of disinfectants to control microbial contaminants.

Treatment Technique or TT: A required process intended to reduce the level of a contaminant in drinking water.

Note:  The state requires monitoring of certain contaminants less than once per year because the concentrations of these contaminants do not change frequently. Therefore, some of this data may be more than one year old.

Turbidity is a measure of the cloudiness of the water. It is monitored because it is a good indicator of water quality and the effectiveness of the filtration system and disinfectants.

A maximum contaminant level (MCL) for this contaminant has not been established by either state or federal regulations, nor has mandatory health effects language. The purpose for monitoring this contaminant is to assist USEPA in determining the occurrence of unregulated contaminants in drinking water, and whether future regulation is warranted.

Fluoride is added to water supply to help promote strong teeth. The Illinois Department of Public Health recommends an optimal fluoride range of 0.9 mg/l to 1.2 mg/l.

There is not a state or federal MCL for sodium. Monitoring is required to provide information to consumers and health officials that are concerned about intake due to dietary precautions. If you are on a sodium-restricted diet, you should consult a physician about this level of sodium in the water. 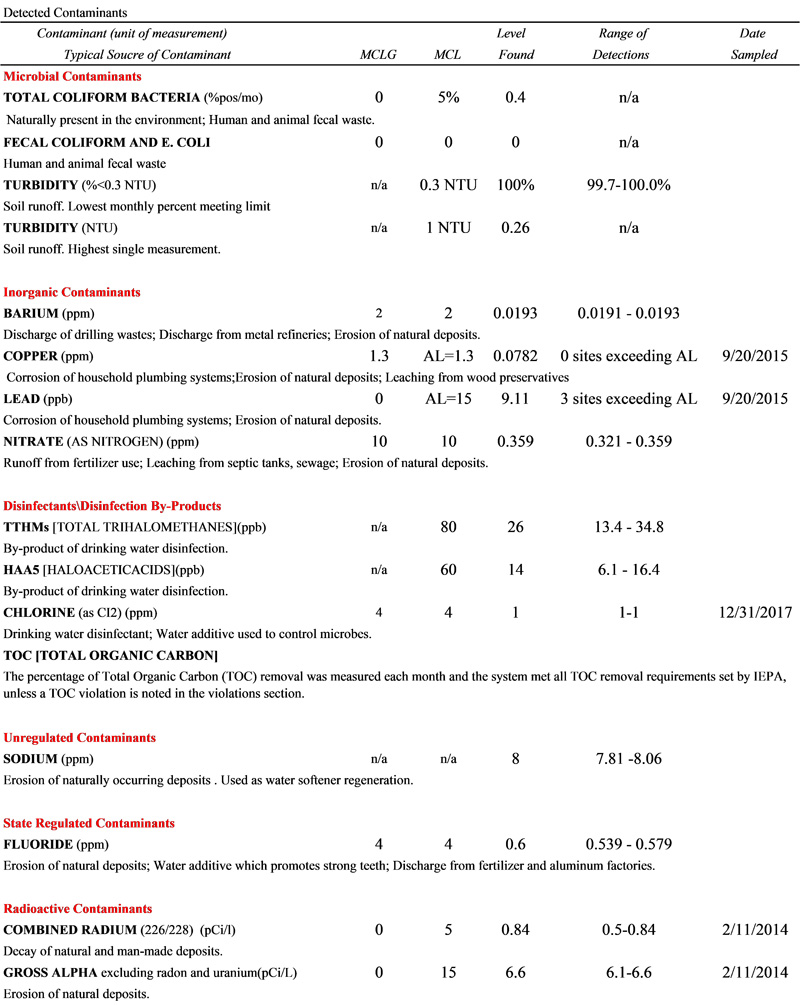