Get ready for the Howl Through the Hills 5K walk/run, co-hosted by The City of Hickory Hills and North Palos School District 117. All proceeds benefit the Hickory Hills Lions Club. The event takes place at 9AM on Saturday October 24, 2015 starting and finishing at Hickory Hills City Hall.

Everyone is welcome to join the fun by running or walking the hills and curves of Hickory Hills. The event will also feature a free Kids Dash for children 10 and under immediately following race. Refreshments and awards will be presented after the run.

Howl Through the Hills 5k Run/Walk

Due to an ongoing sewer improvement project, the Howl Through the Hills race route has been altered – see below. Volunteers will be directing runners and walkers during the event. In addition, each goodie bag will contain a map of the new race route. 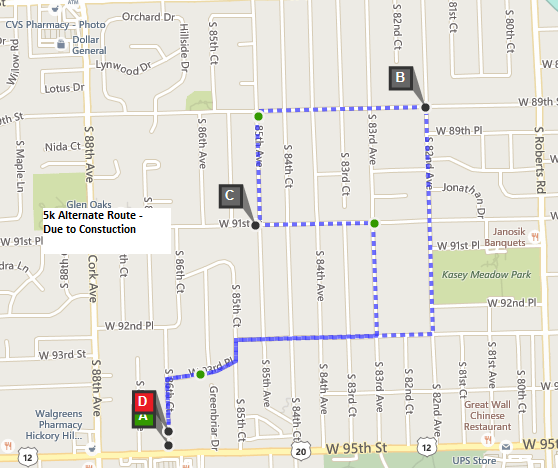